TO THE NEW is a digital technology company that builds disruptive products and transforms businesses. We leverage the power of experience design, cutting-edge engineering, cloud and analytics led marketing to enable digital transformation.

Our team of over 750 people includes passionate technologists, digital analytics experts, video specialists and creative mavericks who have transformed businesses of more than 300 companies spread across 30 countries worldwide. We take pride in our culture which is driven by passion for making an impact through technology.

We have clients and operations all across the globe including US, Europe, South-East Asia, Australia and India.

MetaDesign Solutions is “Offshore Software Development Service and Support” provider company based in Gurgaon, India. The MetaDesign family comprises of closely-knitted multi-talented software professionals having tremendous passion for building end to end business solutions. We are a team of dedicated technocrats who are committed to hear nothing less than one word for our work – Perfect.

Capital One is a bank holding company, the eighth largest in the United States by number of assets. It’s a huge company handling a large customer base. Most importantly, it’s a company that handles financial transactions, setting it a bit apart from the companies that we presented so far, as large node users. With more than 300 billion dollars in assets and 45.000 employees Capitol One is one of the most important bank holdings in the word.

As a bank and not a technology company you might be wondering why are covering it, what could happen at Capitol that’s so interesting? Well Capital One originally started as a data driven technology company. They revolutionized the credit card industry while still growing as a banking institution. Recently, through the Tech fellows program the company set a big focus on technology and innovation. The Technology Fellows program aims to bring a new level of innovation and expertize to software development. Their tech needs are moving in-house, a big difference from most banks who outsource such services. 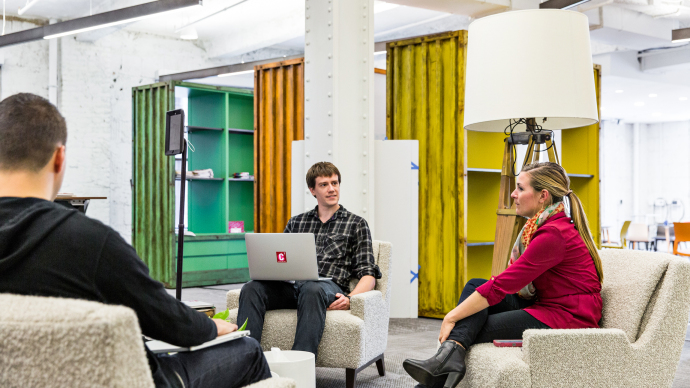 Capital One is as much a banking institution as it is a technology startup, one that banks on node.js on multiple levels. With people like Azat Mardan, the author of “Practical node”, Jim Jagielski, the founder of Apache Software and Mitch Pirtle from Joomla, Capital One looks promising in the innovation department. With these additions Capital One is getting serious on software. It’s actually nice to see that such a large business realizes how important software is for its development (no matter the niche that they operate in). Great businesses are built on great software and financial companies have always relied on technology. Having a small IT shop in house or outsourcing the IT part of your business is not enough, it’s complacent and detrimental to business development and customer experience.

With over 5000 engineers, Capitol one has a huge tech house meant not just to maintain their systems, but also to develop new ones.

Starting with Azat Mardan, the author of Practical Node.js, and an expert of node and JavaScript, the Node shop at Capital One looks bright. They have several teams that use Node.js for several things like:

They’re also using Node for Hygieia, an open source dashboard for DevOps. It started out in 2013 and it uses Node on the build and front end. It’s open source and it won the BlackDuck Source Rookie Award last year.

They choose Node because it allows them to work with the same piece of knowledge on the front and on the back end, to reuse modules and developers. This means smaller teams and a more efficient production.

The facts that they have common ground when it comes to code and information means less overhead for the business. Yes, some projects require teams of pure back end developers and pure front end developers, but right now several Capital One teams work  with “ninjas” (as Azat puts it), people who can do frontend and backend, and also Dev Ops.

“That removes a lot of overhead in communication because now you have fewer people, so you need fewer meetings, and you actually can focus more on the work, instead of just wasting your time.”

There are a lot of exciting things happening, in regard to technological development and innovation at Capital One and we’re happy to say that node is very much involved in it. When big banks like these realize how important software is to them and start investing in it as much as a tech company would, you know we’re on the right track.

Are you an employer or health plan looking for an easy way to engage individuals in healthy and sustainable eating habits that drive positive results for you and your employees or members? You’ve come to the right place. Zipongo’s program delivers uniquely personalized food recommendations tied to content and tools that enable healthy eating at home and at work. Our scalable, easy-to-implement platform offers employers actionable data and insights into how diet affects the overall health of their employees. The result: positive increases in employee performance and satisfaction and significant reductions in health costs.

Employing more than 55,000 people in over 160 countries, we produce more than 778 million product units every year and generate sales of EUR 17 billion (all figures relate to 2015). These numbers alone can easily suggest that our Group is quite a complex organisation. True. But we keep things simple, lean and fast. And we will use this approach now to tell you what our company is all about. Ready … set, go.