In 2013 a few big names starting using Node, for various reasons. PayPal replaced a stack of mixed technologies with Node.js in order to transform the company, The Mail Online –  dailymail.co.uk, one of the highest ranking website in the world when it comes to traffic, replaced Java with Node.js for rapid delivery. Netflix took the same route relying on Node in order to enable rapid delivery and innovation. The number of companies that currently use Node has increased dramatically over the years and so has the demand for Node.js. NearForm, a Node.js consultancy company has grown by 600% from 2013 to 2015, a clear indication on how popular Node has become.

Choosing a programming platform is a major decision that has implications in more ways that we can imagine. It impacts everything about the company or the product, from A to Z. Here are 3 reasons why Node.js is a good choice for a startup.

Scalability is crucial for a startup, it’s a major point to check out before going deeper.  Node is an ideal solution to create a lightweight and large scale system that has a good real time response. The ability to scale up at any later date makes Node a very valuable framework for startups. You never know how high will you go, so you better get ready better you take of. It’s a good argument not just for startups, for example, Groupon changed their front end system from Ruby to Node in order to upscale their system. Linkedin choose Node for the same reasons, they needed to handle multiple services and live connections.

“On the server side, our entire mobile software stack is completely built in Node. One reason was scale. The second is Node showed us huge performance gains.”

Node has got a very good buzz going for it, a buzz that has a lot of benefits. An active community means a lot of support, feedback and frameworks that help you with development. A crucial and valuable helping hand for a startup (and not just). Our own BuiltinNode website is a part of that movement – to bring awareness of Node startups and companies, to promote and connect people in the community.  This also entails a lot of talent coming on the Node side, and a surge in node jobs. Check this graph out from indeed, feel free to add any Node.js jobs you might have on our site. 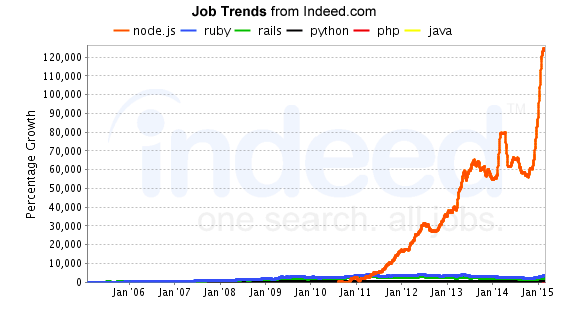 In just a few short years demand for Node devs has skyrocketed, just like Node itself, there are hundreds of meetup groups and dedicated support communities that make Node an active and living entity that’s much easier to use.

We mentioned The Mail Online at the beginning of this article, this online newspaper is also a good example of how efficient Node is in the speed department. Frankly this is rather an important one, when was the last time you waited for more than 5 second for a site to process your connection?

The Mail Online has over 150 million visitors and a hugely complex website, with more than 100 billion images and about 200 articles in the sidebar. Their readers might be happy for this apparent luxury, but this complexity increases significantly the risk for their servers to crash. They switched from 155.000 lines of Java, 30.000 lines of JSP and 50.000 lines of JavaScript to all out Node in several apps. Node solved for them several problems that seemed unsolvable. Walmart turned to Node as well, and manages to double the number of requests per second and reduced response time by 35%. This was way back in 2013, so add 2 years of development on this and think about what you got now in Node.js.

Node.js was and is an excellent choice for several large companies and it has the characteristics and features that every startup needs. An ideal choice for succes.